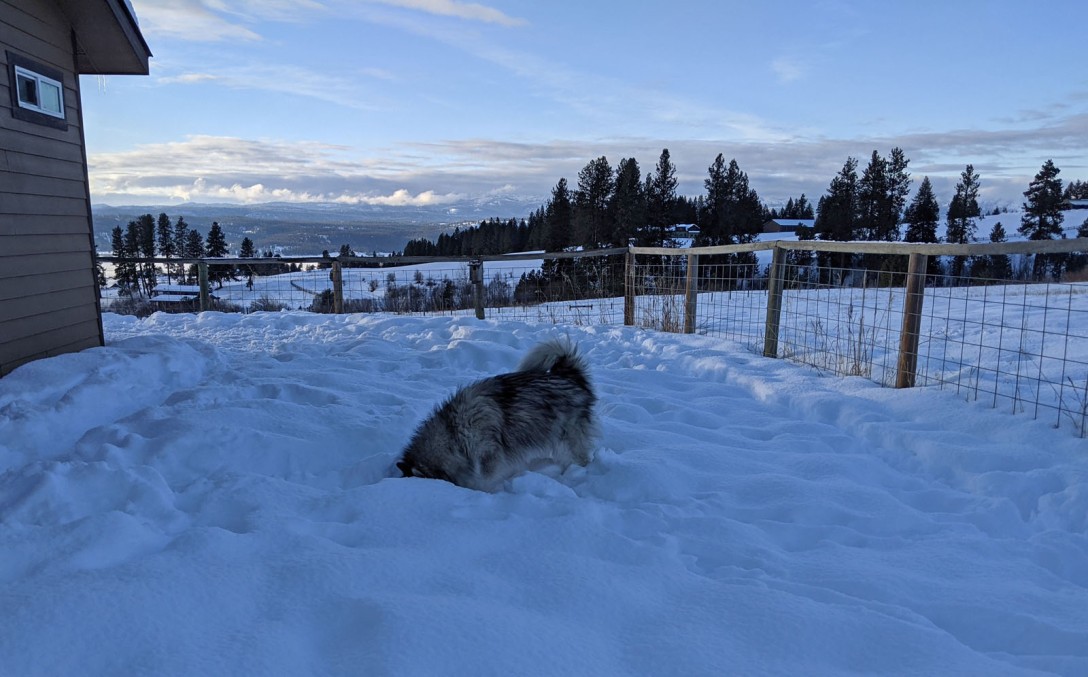 If you pay attention, the natural world offers endless entertainment.

This winter there’s almost daily life-and-death drama unfolding right in my yard. Nature’s circle of life, on a small scale.

In late December I wrote about two ravens who had discovered my dogs’ discarded marrow bones. I toss them over the yard fence into the field (also known as the bone yard). I’ve been doing that for years, but this pair of ravens has discovered this new food source and decided to pay closer attention to us, seeing what opportunities for food we might provide.

In that earlier post I wondered whether the ravens were also enjoying the voles that Conall finds in my yard. In the past I would toss the dead voles into the field, just like the marrow bones. But this winter I decided to leave one in the yard, easily seen atop the snow. It was there when the boys and I left for a run, and gone when we returned a couple hours later. Surely, a raven took it, but I didn’t know for certain.

Since then, I’ve been more focused on what happens to the voles Conall catches. I hope to capture photos or video of the ravens taking a vole from the yard, but so far, no luck. I’m pretty sure they’ve figured out that the boys and I leave for an hour or two most mornings and that’s the safest time for them to swing by for a snack. Ravens are very smart, learning cause-and-effect easily and quickly.

This winter there has been a vole population explosion. Conall has never caught so many. At least one most days, sometimes two or three. Some he finds by digging through the snow, following their scent. Others he traps against the foundation of my house, in the rocks piled there.

I’m also seeing more evidence of voles in and on the snow. I find their tunnels through the snow. And their turds. Lots of turds, often on the snow’s surface. I don’t remember seeing that in past winters. Voles don’t like to expose themselves to predators from above, so being on top of the snow, their dark fur stark against the white, is risky.

I’ve also noticed that Conall’s nemesis, the fox, has been quite successful at finding voles in my field.

In past years I only noticed vole tunnels in the yard when the snow melted off in the spring, eventually exposing furrows on the ground where they had tunneled just beneath the snow layer all winter. This winter, though, I’m seeing tunnels up through the snow, away from the ground. Odd.

Whatever the reason for the abundance of voles and their risky behavior, Conall enjoys finding them and the two local ravens enjoy benefiting from Conall’s skill.

The ravens, realizing there’s a steady source of food in the yard, and getting bolder. In addition to watching them make their regular fly-overs of the house and yard, checking for meals as if reading the chalkboard outside a sidewalk restaurant, a few days ago I found evidence that one enjoyed its vole meal while perched on my fence rail. It, or its mate, spent some time on the snow in the yard as well.

I showed Conall the small bits of dark fur left by the raven in the snow, close to the fence. I think the raven peed or pooped after its meal, based on the small, yellow funnel in the snow just beyond the fence.

My challenge, in trying to capture photos or video of a raven taking a vole from the yard, is that if I’m home, the boys are home. Conall especially, with his keen hearing, often bolts outside when a raven lands nearby, Finn fast on his heels and barking, scaring it off.

Yesterday, while writing in my home office, a dark blur flashed in front of the window. It had to be a bird! Standing to peer out I saw a raven on the snow in the yard. Finally! Although I didn’t think there was a vole there, so I was puzzled what it was seeking.

Conall and Finn were both snoozing behind me. They’ve learned that if I pick up my phone and point it out the office window, that means there’s something interesting out in the field (usually deer) and they’ll jump up and run out the dog door to investigate. Not wanting that to happen, startling the raven, I stealthily tried to get photos through the window without alerting the boys. The angle was challenging and as I moved the raven noticed and took flight.

Still, this was proof that the ravens are gaining confidence that meals can safely be found in the yard, so I’m hopeful that eventually I’ll get better photos, maybe some video, even if that means blocking the dog door so the boys stay inside.

Today I did something that made me realize just how obsessed I’ve become with this interplay between my dogs, the voles and the ravens. Last night Conall found a vole and left it on the snow on the deck. Just before daybreak it started snowing but I could see the vole. Conall and I went for a morning run, and by the time we returned, the vole was buried under new snow. I watched Conall dig it out, pick it up and move it a couple feet before lying next to it, guarding it from Finn (who really couldn’t care less since it’s no longer alive or moving).

The snow continued falling, fast and heavy. Worried the ravens would never find this vole, I used a shovel to move it next to the house where the eave would shelter it. Tomorrow, when this current storm has finished, I’ll move it again, putting it on top of the snow so the ravens can easily see it. And I’ll hope I get to watch them take it.

Is that crazy, or what?

Conall’s Food Bank for Ravens is open for business, with a minor assist from me.

Feature image: Conall searching for voles in the yard.