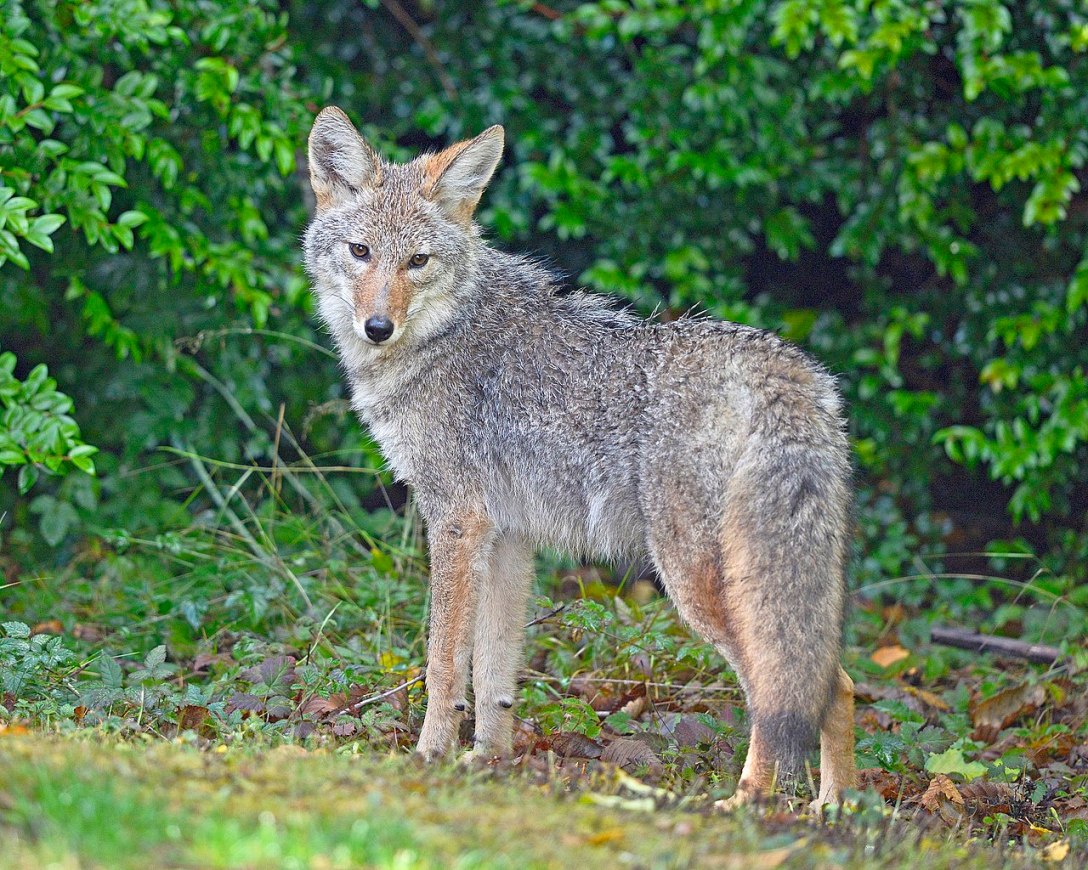 Especially by dogs and their close relatives: wolves, coyotes and foxes. They fascinate me.

I recently wrote about a fox who visits regularly, hunting for voles in my field, irritating Conall.

I also wrote about the budding symbiotic relationship between a local raven pair and Conall’s voles, left in the yard as offerings for the ravens to take and eat.

Recently, the predator/prey dynamic near the house seems to be shifting slightly.

I haven’t seen the fox in a while.

One morning in early January, while clearing the snow-covered yard of dog bombs, I watched as Conall became laser-focused on a small portion of the fence. His demeanor changed instantly from relaxed and goofy (his usual) to on alert. He sniffed the snow against the wire mesh, looked up slope, smelled some more, dug the snow loose, smelled, and looked. Then he started woofing, facing uphill. I followed his gaze, searching for something woof-worthy, but couldn’t spot anything; no fox, deer, dog, or human moving anywhere uphill from us.

Conall continued vocalizing, a quiet woof as opposed to an alert or angry bark, but persistent. This was new and odd behavior for him. Moving closer I saw canid tracks coming down the slope to the spot at the fence where Conall detected a scent. Snow conditions didn’t allow me to get a good sense of the true size of the prints. It looked like the canid pawed through the snow a bit, right at the fence line, maybe seeking a vole. If so, they would have left a lot of scent from their paws on the snow and perhaps the fence wire. Scent that Conall detected and, apparently, considered a serious violation of his space.

Conall started digging through the snow on his side of the fence, down to the dirt, as it he wanted to follow the scent up the hill.

Even after I went inside, Conall continued to smell the scent and sit at the fence, woofing while looking uphill. That went on for so long I finally coaxed him inside with a treat and blocked the dog door.

The next morning I had my answer as to who had visited and why Conall was so upset: a coyote. Boldly walking near the house and yard, in daylight.

[I just now noticed the bird – a raven? – sitting atop the tree to the right of that photo!]

Here’s Conall’s reaction to that coyote daring to come so close to the house. Conall had been in the yard, alerting me to the coyote in the field – barking angrily at it – so I brought him inside. That didn’t stop him from telling the coyote he wasn’t welcome as I took some video. (Please ignore the dirty window!)

On January 7th I heard Conall barking angrily at something far off in the field. I went outside and thought it was the taunting fox, hunting in her usual area. But when the animal stopped, looked at us, and started its eerie bark-howling, echoing as it carried across the landscape in the foggy air, I knew it was the coyote. Once again I was struck by how confident it was.

Seeing this bold coyote so frequently likely explains why the taunting fox has been AWOL.

Coyotes and foxes are not friendly with each other. They compete for similar food sources, so coyotes will push foxes out of a territory, attacking them if necessary.

The same is true of wolves and coyotes, with wolves pushing coyotes out of a territory where they compete for food.

Knowing all this helps me interpret what’s going on around me, even when I don’t actually see these predators.

Often, I only hear them.

Especially the coyotes. They’re quite vocal, usually in the wee, dark hours when I’m trying to sleep. Mostly, they howl and bark to communicate with each other and to establish territory. Conall reacts to their vocalizations, waking me up as he rushes outside to join in their conversations. This winter I’ve taken to blocking the dog door when I go to bed most nights so I don’t have to get up at 4:00 am (a time seemingly favored by local coyotes), rushing to put on clothes and boots before stumbling in the bitter cold into the dark, snow-covered yard to haul Conall back inside for some peace and quiet.

I do wish Conall and I were awakened by wolf howls, though. I wouldn’t complain about that. But that hasn’t happened in years. In fact, I don’t know that Conall has ever heard a real wolf howl. I have, and my two female Alaskan malamutes have, not long after we moved here in 2005, on a summer’s night when my bedroom window was open. It was…magical. Rare. Spine-tingling. Wonderful. The girls listened, remaining quiet but alert. I like to thing they were in awe, as I was.

Wolves have learned that to stay alive in Idaho (and any other state in the U.S. where they have re-established themselves against all odds) they must stay far away from people, so I don’t get to hear or see them anymore. The last time I saw a wolf running in the forests of Idaho was in 2008. They’re out there, but justifiably wary, despised by most locals, hunted any time of year.

I wonder what Conall’s reaction to a nearby wolf howl would be?

I already know he doesn’t like having coyotes nearby. If we hear them howling while we’re out running in the forest, Conall becomes guarded and alert, wanting to avoid them. But apparently he’s willing to confront them if one comes too close to the house. Is that his wolf DNA expressing itself, a natural reaction on his part to challenge a coyote invading his territory? In contrast, Finn doesn’t react to the coyotes, whether hearing their howls and barks or seeing one in the field. He’s neither wary nor upset.

The following is a recording of Conall having a discussion with a coyote not long after sundown on January 16, 2021. I enjoy listening to these conversations. I would love to know what each is saying, just not at 4:00 am.