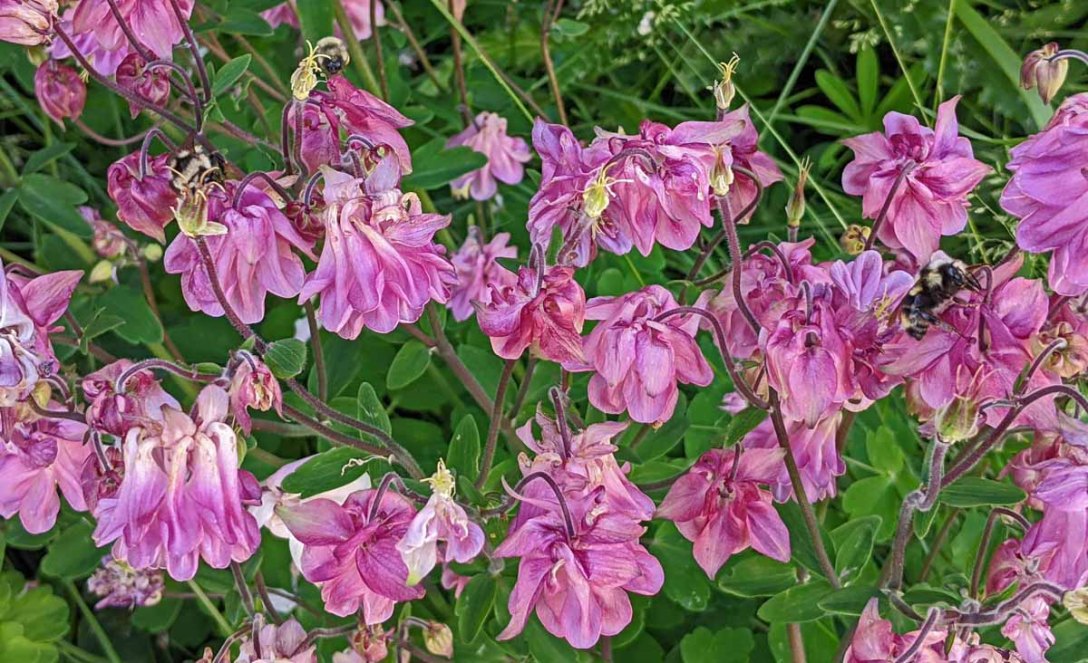 I’m referring to the large, fuzzy, pollen-collecting bumblebees, of course.

These bumblebees love the columbine and lupine growing in my wildflower garden beside the house.

Last year they appeared much earlier in June, so I was concerned, wondering if I’d see them again, but it has been cold and stormy lately. It’s not unusual for it to snow here in June. I don’t blame them for waiting. Even with their fuzzy, insulating pile, their flight muscles don’t work properly until the air temperature is 55F (13C) and even then, they have to shiver to warm up before taking flight. My wildflower garden gets the warmth of morning and early afternoon sun, so that’s when I see them.

Normally, I give all kinds of bees and wasps wide berth. I’m allergic to bee stings, and while I always keep Benadryl on hand, why risk anaphylactic shock?

But last year, when I first noticed so many bumblebees in this garden, I realized they were so focused on collecting pollen and drinking nectar that they considered me a minor nuisance, something large to have to fly around to get to the next best pollen-laden flower. So today, unafraid of a sting, I spent some time hanging out with the bumblers, experimenting with closeup photos as well as video.

First, a video in slow motion, followed by one in regular speed. Bumblers are hard to keep up with!

We need bees! We need pollinators! Find out what attracts them in your area and plant those flowers and shrubs to sustain them. Earth, bees, and all of us who live on this planet depend on the plants that require bees for pollination, so sustain and be grateful to bumblebees and honeybees and all pollinators for keeping us all alive and fed.

18 thoughts on “The Bumblers Have Returned”