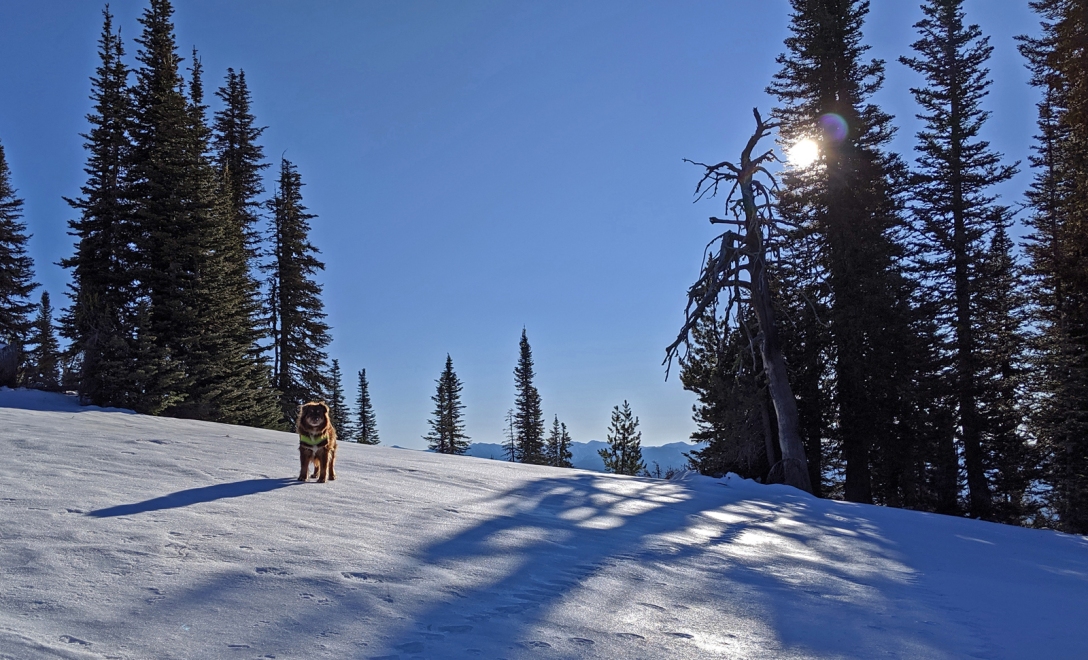 You all know I’m participating in NaNoWriMo this month – National Novel Writing Month. Stating that publicly is, in itself, a calculated risk. One I embrace, because it keeps me honest, and motivated. But taking on risk means simultaneously accepting the possibility of failure, of not reaching one’s goal.

I was fortunate to grow up with a test pilot father who knew all about taking calculated risks. His gift of learned wisdom, including how to be calculated in assuming risk, allows me to adventure is ways most consider too dangerous.

Yesterday morning I found myself taking on calculated risk, on a snow-covered trail with my dogs, which prompted lots of thinking about the risks of writing as well as the risks of daily life. As I’ve written before, I often do my best creative thinking when adventuring in the forest, and this was no exception.

My adventure in the snow yesterday prompted some writing this evening about the notion of taking calculated risks. Here’s a small portion, with photos and video from that snowy adventure to illustrate.

Our adventure on the mountain is a “bluebird” morning – cold but not too cold, with clear impossibly-blue skies, the rising morning sun shining through the trees. We have the mountain to ourselves; no people about, wildlife scarce, even most of the birds have flown south, just a few ravens cawing occasionally.

My plan is to reach the summit via the resort’s service road, then return along a single-track trail that traverses back and forth across the face of the mountain.

At the top of the single-track trail, the snow is crusted over, sufficient to support even my weight, at least while standing. Under nearby trees, the ground is bare. “Nothing ventured, nothing gained,” I think as the boys urge me to start heading down the trail. No one else had been here; the only tracks I see are from deer or elk.

“Okay boys, let’s do it!” I say and off they go. Almost instantly, though, Conall punches through the crust, while Finn – weighing 45 pounds to Conall’s 95 – mostly floats on top. I know if Conall breaks through, I will, too, especially if I try to run. I convince myself that as we lose elevation, there will be less snow and hopefully plenty of bare spots because the mountain faces west, getting lots of midday sun. The boys are excited, I love running in snow, so off we go.

A section of trail that in summer would take us 30 minutes to traverse becomes a 75-minute slog. There are a few bare spots, and some other spots where the snow is just a couple of inches deep, but there are also places in the eternal shade where I’m punching through snow to my knees. Gravity isn’t much of a friend, as it turns out, at least to me or Finn. Conall, with longer legs, is having a blast. At points I wonder if we should turn back, but going uphill through such conditions would be even harder. I watch Finn struggle in places and worry his older knees will protest. Could I carry him down to the car if he blew a knee? Best not to invite trouble with such thoughts. Then I watch Finn catch the scent of a deer or elk, following footprints off trail, or flushing some grouse, not bothered at all by the difficult conditions. He’s fine.

Onward. I’m working hard, sometimes punching through the snow with one step only to find crust that supports my weight the next step or two, then punching through again. So uneven. In places it’s clear some elk used the trail recently, their huge hoof prints making tunnels in the snow that later crusted over, making difficult, uneven footing for my larger foot. After a half hour of my feet constantly encased in snow, my shoes, socks and lower portion of my tights soaked, my feet go numb.

This isn’t a new sensation, numb feet. Experience reminds me that I can – and should – keep moving on feet that feel like hard rocks attached to my ankles, keeping blood and warmth circulating. My mantra: relentless forward movement. Big high-stepping foot placements through the crusty snow, occasionally running where the snow is soft. Other than my feet, I’m plenty warm and have extra clothing in my pack, so I don’t worry about being cold. I’m taking photos of the gorgeous scenery. I am concerned about Finn, though, working hard in the deep snow. He figures out where the crust is most likely to support his weight, and when it doesn’t, falls behind me and Conall and uses our footprints rather than post-holing his own. Smart dog.

Our morning adventure is more than I bargained for, but not more than I feel competent to handle. I always give myself permission to retreat, change course. We could have taken a more direct, cross-country route to the base on slopes with less snow at any point. I also knew that in a true emergency, I had cell reception (there’s a tower at the summit of the mountain). Oddly, I remember thinking that I was glad I was alone: I know few who would have enjoyed the challenge as much as I did, and having a whining, complaining friend along would have ruined the experience, adding to the risk if they couldn’t handle it.

My dogs are always up for these adventures. We perfectly complement each other. Together we’re brave and we’re safe.