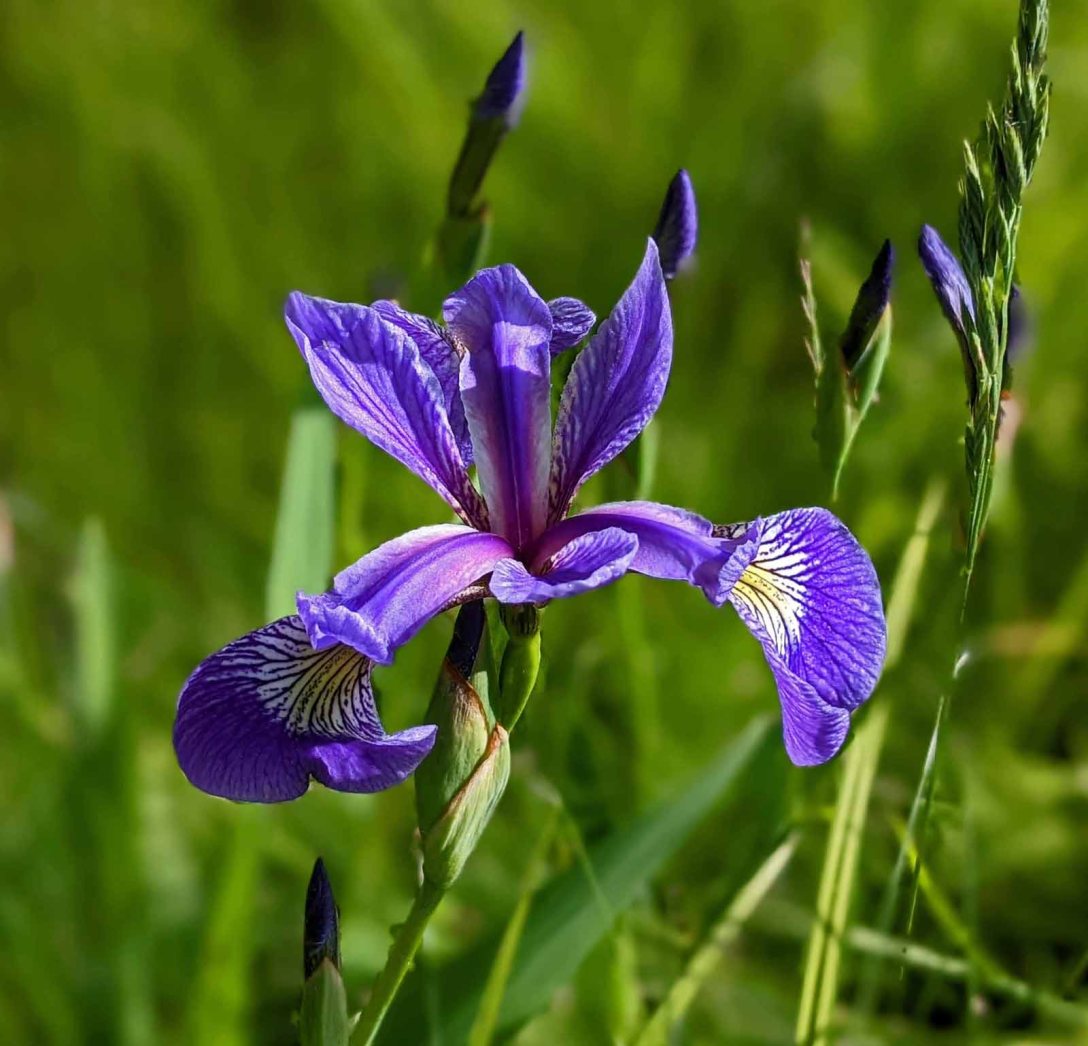 I found some blooming recently, in a marsh and along the edge of a pond where my dogs and I spend many mornings exploring.

“Versicolor” means changing color, or different bands of color. The Blue Flag Iris delivers on its name, dark purple-blue edges with yellow and cream at the center, dark lines like veins adding dramatic contrast across the petals. The flowers fly like bright flags atop tall, sword-like leaves, waving in the breeze.

Actually, the flag part of the name comes from Middle English “flagge,” meaning rush, or reed.

I first noticed the blooming irises when Conall started wading through a small marsh whenever we walked by. He discovered that frogs live there, and enjoys startling them into jumping for safety from his big paws by diving under the water’s surface. I also noticed an odd sound, coming only from the marsh. I realized it had to come from frogs, but which kind? The sound was nothing like the peepers or wood frogs I’d come to recognize this spring. Following Conall to record the unusual and unique sound of those frogs, I saw the irises blooming.

Listen carefully and in the video below you’ll hear what sounds like a loose banjo string being plucked a couple of times.

Thinking that’s what the frog call sounded like is how I discovered I was hearing green frogs, which are different than green tree frogs. I googled “frog that sounds like a plucked banjo string.” (Gotta love how far search engines have come.) They’re common in the northeastern part of the U.S., but new to me.

As the boys and I returned to that spot on our walk that particular morning, Conall heard the frogs calling and dashed over to investigate. Old man Finn did a good job of keeping up even though, because of his near-deafness, he had no idea what they were chasing. He just keys off of Conall whenever we’re out in the big world. (No frogs were or will be harmed by my dogs. Neither of them will pursue things under the water’s surface.)

But I digress. Back to Blue Flag Irises.

Sadly, the ones in the marsh are now past their prime. Beauty is fleeting.

This morning – gorgeous, clear, sunny, and cool, with just enough breeze to keep the bugs away, i.e., a perfect morning – I saw a few newer Blue Flags blooming alongside a narrow wet spot created by spring snowmelt runoff, just beyond (and flowing into) one of the large ponds. It will dry up soon, as will the larger marsh, later this summer. One iris stood all alone, two others several yards away.

I began composing photos in my mind – a closeup of the flower, tall field grass immediately behind it, highlighted by sunlight, trees and blue sky in the background. I knelt on the ground and started taking photos with my phone camera.

The boys wandered through nearly every frame, wreaking havoc with my phone’s ability to focus on the flower. It never fails – when I kneel on the ground to take a photo of something, the boys come close, curious about what I’ve found. I decided to go with it, see how the photos turned out when I got home. It’s clear the camera had trouble decided what to focus on – flower, grass, or dogs. I don’t care; I’m delighted with the results, no matter what’s in focus and despite noticing only at home that the iris was in poor shape, the petal facing the camera having been munched on by bugs.

At this point, I switched to portrait mode, which just made the boys blurry.

When I moved on to the two other irises nearby, I saw that they were past their prime.

Even though the boys and I are tramping through the same fields and woods, day after day, it seems there’s always something new to see or hear, even within a season. Like newly-blooming wildflowers. Or the Ruffed Grouse family we keep crossing paths with, mama doing her best to distract us so her babies – barely able to fly – can scramble and hide in the shrubs and grass. And the coyote that barked a loud and consistent warning at us from just feet away in the trees, likely also protecting her young, convincing us to reverse course.

Yesterday was Father’s Day in the U.S. As I thought about my father, I reflected that one of his many gifts to me – perhaps the one I’m most grateful for, after an appreciation of dogs, of course – is finding joy in quietly observing and learning about the natural world around me. It’s a lifelong endeavor, and endlessly fascinating.