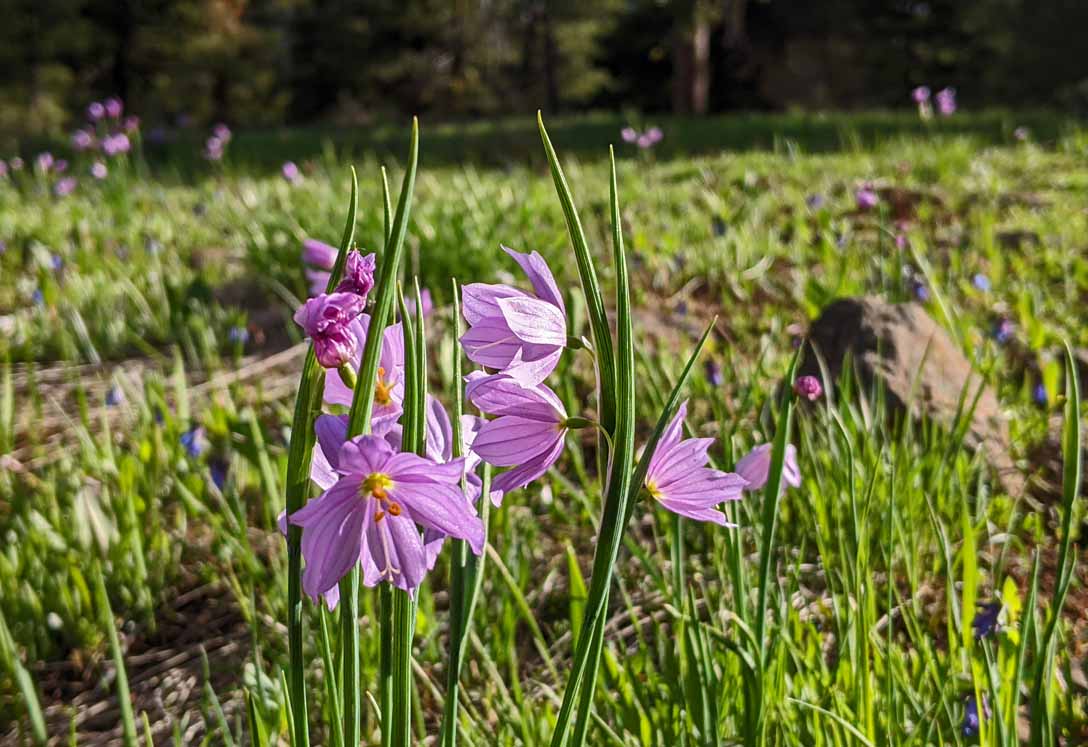 The morning of May 12th I awoke to the smell of smoke in the air, that pleasant sitting-around-a-campfire smell. At daybreak, I could also see it, hovering over the ground like a thin, dirty-white veil, wrapping my house and everything on the valley slope as it slowly rose to meet the forest.

The feature photo was taken that morning from the valley floor, looking toward my neighborhood and the forest, the smoke lingering near the ground in the cool morning air.

I wasn’t surprised by the smoke because the day before, after the boys and I finished our early-morning run in the forest above my house and were driving out, I saw a large collection of Forest Service vehicles in what is otherwise a wintertime snowmobile parking lot at the edge of the forest. A group meeting was underway, a circle of women and men standing in the dirt lot. They were preparing to set a “prescribed burn” in the forest.

Anyone living near a national forest, especially in the West, has become intimately acquainted in recent years with the concept of “controlled” burning, or “prescribed burns” as a forest management tactic.

Here is how the Payette National Forest announced and explains the need for this spring’s round of burning on the InciWeb site, noting the number of acres to burn in various districts within the forest :

The Weiser Ranger District plans to apply fire to approximately 1,200 acres in the Robinson project area (22 miles north of Weiser).

The Krassel Ranger District plans to apply fire to approximately 5,500 acres within the Bald Hill project area (west and east of Yellow Pine); 3,800 acres in the Four Mile project area along the South Fork of the Salmon River near Reed Ranch and Poverty Flat camp ground (Approximately 18 miles east of McCall); and 70 acres around Krassel Work Center.

Trail heads and roads that lead into these areas will be posted with caution signs and a map of the prescribed burn locations.  Fire personnel will work closely with the Idaho/Montana Airshed Group, the National Weather Service, and the Idaho Department of Environmental Quality to ensure that smoke impacts are minimized.  The decision to ignite on any given day will depend on favorable weather conditions and the need to reduce smoke effects as much as possible.  Smoke from these prescribed fires will be much less than what would be expected from a wildfire.  If smoke concentrations approach air quality standards fire ignition may be delayed until air quality improves.  Residual smoke may be visible for up to 2 weeks following ignition, but most of the smoke from the fires is anticipated to dissipate 1-2 days after ignition.

The Payette is approximately 2.3 million acres in size, so these prescribed burns, relatively speaking, are very small.

And if prescribed burns help prevent larger wildfires, I’m all in.

Too often since moving here in 2005 I’ve seen the enormous plumes of smoke from large wildfires on the Payette, rising fast and impossibly high in the sky, looking just like the plume of ash I witnessed when Mt St. Helens erupted in 1980. Eventually the wind disperses the smoke until it covers an entire landscape for miles around for weeks on end. Air quality is hazardous at times, and the smoke impossible to avoid.

The Teepee Springs Fire was the one that burned closest to my home, starting five-to-ten miles due north as the raven flies. For the first time, I attended evacuation information meetings hosted by Forest Service personnel, making the danger all the more real. That fire burned northeastward, away from me, but caused evacuations of nearby communities. As with many late-season wildfires, it kept burning to some extent until early winter rain and snow finally put it out.

Two years ago, in May, I noticed what appeared to be a new trail in a section of forest near my home where my dogs and I often hike. But it went straight up a steep hillside; a trail would normally climb such a slope via switchbacks. That’s when I realized it was a firebreak – a gap in vegetation or other combustible material that acts as a barrier to slow or stop the progress of a wildfire – in preparation for another prescribed burn. A few days later, from my house I saw smoke rising between the trees in that section of forest. The next time the boys and I hiked through there, in June, some hot spots were still smoldering.

It’s not unusual to be driving somewhere and see smoke rising from the forest. The Forest Service does a good job of alerting motorists, residents and tourists that they’ll see smoke from prescribed burns with signage on roads and posts on social media. Still, I’m sure they get tons of calls from people fearing the smoke is from a new wildfire.

During the past few days of runs and hikes on forest trails with the boys, I’ve pondered the strange mingling of two primary signs of springtime in the forest: blooms (wildflowers), and burns. New life, and fiery death.

Yesterday it was just me and Conall, running on dirt trails where only a month ago we were running on snow. As we started out just before 8:00 am a Forest Service fire engine truck drove into the big lot (another snowmobile access point) and parked. Checking the sign board at the trailhead I saw the map showing where this particular prescribed burn would occur. It included the trails I wanted to run. Based on my observations the previous day, I knew that the crew wouldn’t get started with actual burning until after 10:00 am, so off Conall and I went for our run of roughly 90 minutes. (Plus, they don’t ever close an area to use during these prescribed burns, they just warn that burning and smoke will be occurring.)

The wildflowers were amazing.

At one point during our run, on a section of trail heading north, I noticed red flagging on tree branches alongside the trail. This was new. I wasn’t sure of its meaning. Then, at a point where the trail curves westward and down toward the parking area, I saw a new firebreak, continuing north, with more flagging along its edges. Just as I’d seen in 2019, in preparation for the prescribed burning that was about to start, a portion of the existing trail within the prescribed burn area had been flagged as part of the overall firebreak.

When Conall and I finished our run, the Forest Service fire crews had all arrived with their vehicles and were holding their meeting in the parking lot, exactly as I’d observed the day before prior to the prescribed burn near my house.

It will be a few days before the boys and I run in this area, giving the smoldering stumps and logs a chance to cool so no dog pads are burned, although the torching is very specific and in this area, mostly small piles of tree debris from thinning of low branches over the last two summers. The trails themselves never show evidence of burning.

That evening I watched as some of the smoke from the burn near my house settled in the valley, seemingly following a creek that runs out of the forest across the valley floor to meet a small river that eventually drains into the Salmon River.

This morning the air was clear, so the boys and I ventured into the forest where they burned two days ago. Rounding a curve just a quarter mile up the hill I was surprised to see that they’d burned right to the edge of the road. Lots of smoke was beginning to rise after being kept low to the ground by cold overnight temperatures.

I drove a mile up the road to one of our favorite places to run and hike because the old logging roads are blocked by a gate. When we started our hike, the air was clear and the wildflowers were beautiful.

The boys even found a small patch of snow to enjoy, taking several bites to slake their thirst.

As we got closer to the gate and car, it was clear that the warming temperatures were helping the smoke rise. Now I could smell and see it.

I can’t help having conflicting feelings as I watch the smoke rise from prescribed burns, see the smouldering stumps, downed branches and logs, the blackened trunks of healthy trees with black soil around their roots. I fully accept and believe in the science that shows these strategic burns make forests healthier in the long run and in the short term my well prevent a devastating wildfire from getting completely out of control.

I worry about the displacement of wildlife, even if just temporarily.

But mostly, I hate the smoke. Especially knowing how damaging the particles are to lung tissue. Most prescribed burns occur in the spring, when the ground and vegetation is still moist enough to keep the burns controlled. Yet when the burns occur so close to home, like this spring, it begins to feel like fire season is April through October and we rarely get a break from the smoke.

Yet another reason I’m looking forward to moving to Vermont. They have wildfires there, too, but nothing like what the West is experiencing.

Until then, I will continue to focus on the wildflower blooms at my feet – the happy beauties of the forest – and accept the blackened scars of prescribed fire as a necessary part of the forest’s ecological health and life cycle.

15 thoughts on “Spring in the Forest: Blooms and Burns”