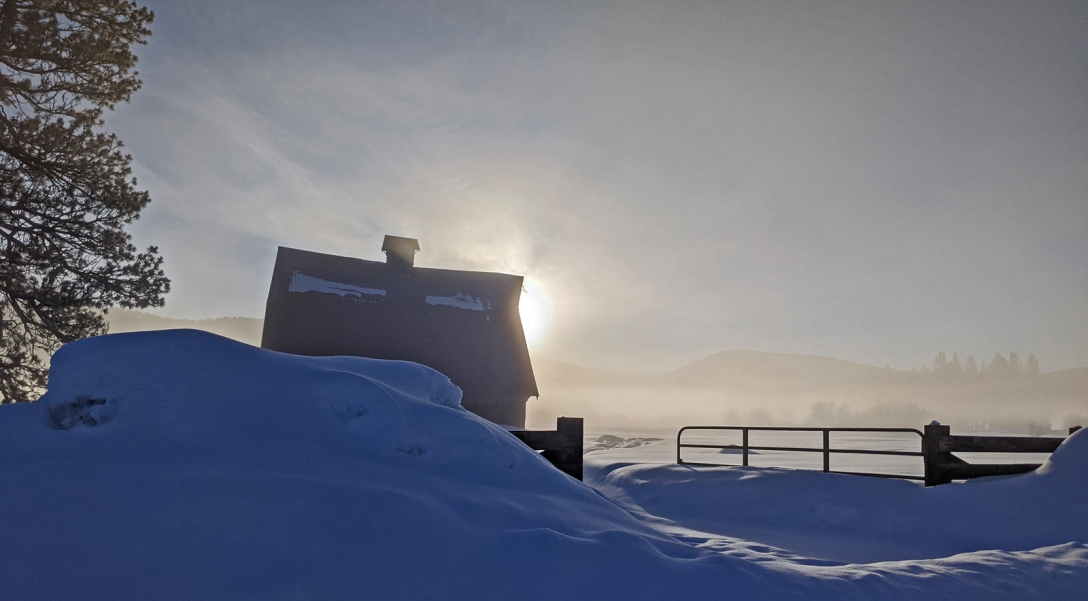 Living in the mountains, one quickly learns that predicting weather in March is a fool’s errand. For several weeks, the swings between winter and spring are wild and seemingly random. Nature teases with warm days of sunshine, melting the long winter’s snow pack on the ground and inviting you to step outside without jacket, hat and gloves for the first time in months, turning your face toward a warmth you’d almost forgotten. A day later? Nature jolts you back into a winter mindset with sub-freezing temperatures and new snowfall.

You learn to go with the flow, finding ways to enjoy whatever weather you wake up to.

Morning is my favorite time of day. I wake easily, eager – along with the dogs – to head outside for some sort of adventure, whether a trail run, a walk, or a cross-country ski. While winter’s snows limit our options, especially toward spring when the snow softens, we’re not often deterred. We love snow too much.

It’s a rare day when the weather is so awful that we don’t get out at least for a walk. Starting each day outside, in nature, sets a positive tone for the hours that follow. Any lingering stress or problems from the day before quickly disappear.

When you arise in the morning, think of what a precious privilege it is to be alive – to breathe, to think, to enjoy, to love.

I often tell myself, as the boys and I are traveling to our starting point for that morning’s play, that I won’t take any photos because we’ve been there a million times before and it will be same-old-same-old.

But I’m always wrong. I take photos. Every time. Because each day we’re outside, wherever we go, even in winter, there’s something new, in the light cast by the morning sun, the fog, the snow, the scenery, the wildlife, or the boys’ behaviors. In awe, I want to keep and treasure it all, memories of yet another fine day.

There it is, fog, atmospheric moisture still uncertain in destination, not quite weather and not altogether mood, yet partaking of both.

The valley where I live has a small river running through it, inviting fog to form overnight. Fog is a regular morning feature. It moves, shape shifts, undulates, creeps and envelopes as night gives way to day. I often watch, mesmerized, as it silently advances from valley floor up toward my house a hundred feet higher at the edge of the forest, shrouding trees and houses below me before slowly retreating as the rising sun crests the ridges to the east, burning it off the landscape for the rest of the day.

It’s a living thing, the fog. Just another form of the wild life I enjoy observing here.

March is a tomboy with tousled hair, a mischievous smile, mud on her shoes and a laugh in her voice.

My father always referred to me as a tomboy when I was a child. I consider it a badge of honor. I’ve deliberately chosen to never outgrow that sense of play, adventure and discovery as an adult. Who cares how I look, how dirty I get, as long as I’m outside, enjoying and experiencing nature? The dirtier the better.

A good attitude to maintain, I remind myself, with mud season approaching.

All walking is discovery. On foot we take the time to see things whole.

Even better that I get to see “things whole” through the eyes of my dogs. Especially Conall, who shows me so much I would otherwise miss.

Missing from the life of modern man is the deepest connection with the changes of the seasons, sunrise and sunset, the phases of the moon, the dark forest, the soul of brother animal, and the soil. Man’s soul is starving from this separation, lack, and poverty.

I couldn’t agree more. I imagine how much better the world might be if those deep connections were enjoyed and maintained by all. One can’t advocate preserving something they’ve never experienced.

Never go too long without watching a sunset.

Advice I take to heart.

It was one of those March days when the sun shines hot and the wind blows cold: when it is summer in the light, and winter in the shade.

I see spring in the light and winter in the shade a lot at my house, specially in the early part of the day. It’s beautiful.

Mornings are, I’ve learned, when the resident pair of ravens come by to check whether the boys and I have left them any treats to retrieve.

Conall’s Food Bank for Ravens has been bare lately (no voles), so I started tossing apple pieces onto the snow in the field, in addition to the occasional marrow bone (after the boys have enjoyed them). The raven pair is learning to trust it’s safe to retrieve them, although they’re still a bit wary of Finn’s barking and of me if I come outside to capture photos and video.

They seem to know that Conall won’t disturb them. He just quietly observes. Ravens and wolves have a known history of cooperation and playful interaction, so I like to think that these ravens accept the presence of the wolf-like Conall.

Lately some magpies have taken note of the raven’s interest in this bit of real estate and joined the party.

Add Finn to the mix and things suddenly get louder.

Such days of winter-spring mixed are the backdrop for the arrival of seasonal birds. Some are migrating, stopping briefly on their way north. Others are returning to this area from their wintering grounds to build nests, mate, and raise young. Every day I hear more birds.

This evening, to my surprise, a rafter of turkeys appeared, crossing my lot. Some minutes earlier, near sunset, I had given the boys marrow bones to enjoy outside on the snow-covered deck. Conall’s woof alerted me to something unusual, so I left my office to investigate.

A moment later, as I continued taking video of the turkeys, Finn decided they needed to be herded away from the yard. That’s the job of an Aussie! It wasn’t until I uploaded the video that I noticed he did so – barking – with his marrow bone safely in his mouth. Priorities.

There’s a Japanese words that resonates with me: Yūgen – an awareness of the universe that triggers emotional responses too deep and powerful for words.

Every one of these small encounters with nature pulls emotional strings within me. Individually they may appear insignificant, silly even, yet collectively they resonate deeply, reminding me what a tiny cog I am in the big machine called nature while inspiring me to learn more, embracing it all.

An end note, with humor, alluding to this post’s title: if you live in a place like I do – the mountains of Idaho – you quickly become familiar with nature’s ability to tease you into believing it’s the end of one season and the beginning of another.

I’m pretty sure we’re in “fool’s spring” this first week of March.

And finally, an apropos quote from one of my favorite authors:

I tell you, we are here on earth to fart around, and don’t let anyone tell you different.