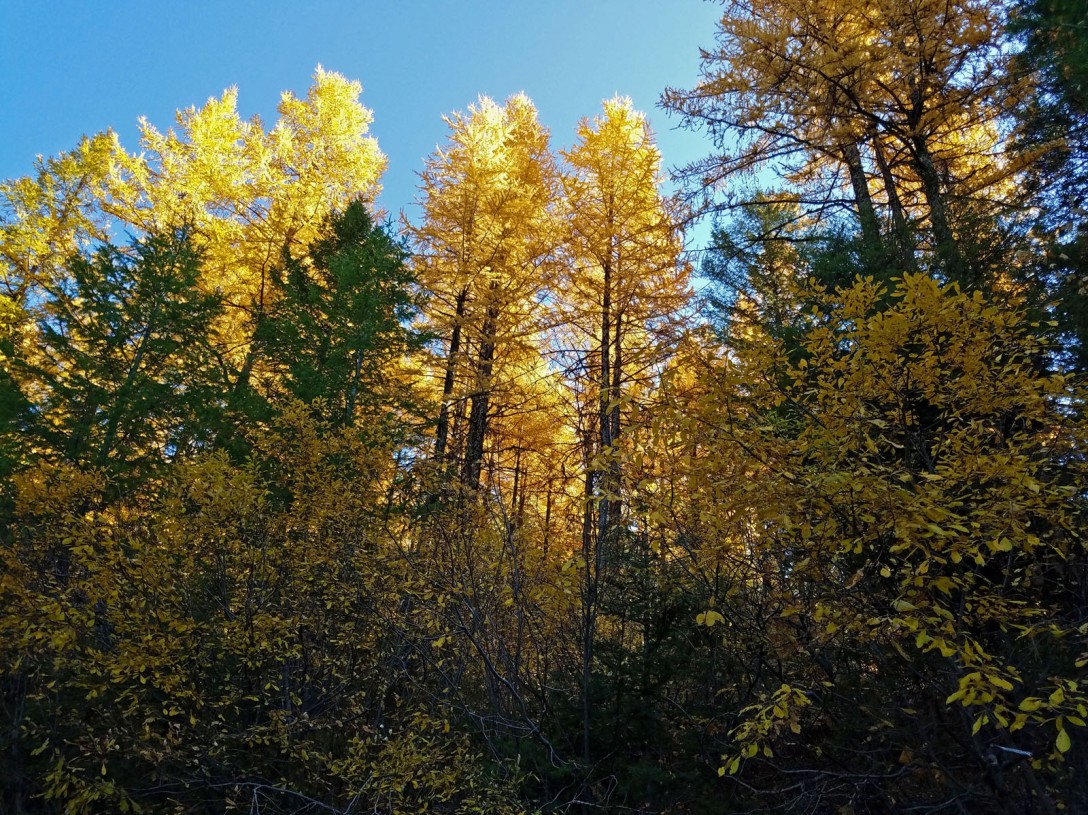 Nature, and more particularly the forest nearby, always envelope me in an embrace that soothes and heals.

This time of year, my attention turns toward a particularly wondrous tree: the larch.

The forest around me is primarily evergreens – firs and pines. Nice trees, all, but rather mundane in their…greenness.

I don’t see a lot of fall color here in Idaho’s central mountains. Most of it comes from huckleberry and other shrubs growing low to the ground.

There are some aspen and birch trees mixed among the evergreens, and in autumn their yellowing leaves add accents to the slopes of the mountains before wind or old age drop them to the ground.

Soon after the aspen and birch leaves are done, the western larch trees provide a second wave of brilliant yellow to the forest. They suddenly appear as light, bright feathery branches of yellow, as bright as the sun, vigorously proclaiming their individuality among a sea of evergreens. It’s a stunning display.

I think of the larches (also known as tamaracks here in Idaho) as stealth trees, hiding all spring and summer in their greenery among the other forest trees with needles, until late fall when their needles slowly turn to lime green on their way to a brilliant yellow before dropping and littering the ground in a soft burnt-yellow carpet that I love running on.

Every October, driving down the steep canyon road between town and home, national forest on both sides, I start noticing the larches. First just a handful make themselves obvious with their yellow among the vast swathes of green, then many more come out of hiding, collectively assembling for the last hurrah of autumn.

The largest of the nine larch or tamarack species growing in the Pacific Northwest, the western has pale green foliage, a rather “feathery” graceful arrangement of branches, and an open crown. Brilliant yellow in late fall, the needles drop in November. In fact, this species is one of only two coniferous species that sheds its needles every fall. Its thick bark is reddish-brown in color and features elongated scale plates.

Western larches can grow to heights of 200 feet and to diameters of 7 feet, though more common examples are in the range of 150 high and 4 feet in diameter. The crown of the western larch generally comprises only one-third to one-half its total height, and mature trees often have 60 to 100 feet of clear trunk.

A fire-resistant species, western larch occupies a restricted range, preferring moist mountain slopes from 2,000 to 7,000 feet in elevation. Western larch is generally found in mixed-conifer stands, where it competes aggressively with other species that prefer full sunlight.

According to Wikipedia’s article about the western larch, it is very cold tolerant, able to survive winter temperatures down to about −58 °F (−50 °C). It’s seeds are an important food source for several birds, including the pine siskin. The wood is tough and durable, but also flexible in thin strips, and is particularly valued for building yachts. The wood is also highly prized as firewood in the Pacific Northwest, burning with a sweet fragrance and a distinctive popping noise.

Before moving to Idaho, my only exposure to larch trees was on autumn hikes in the high eastern slopes of the Cascade Mountains of Washington state. There, the alpine larches are stunningly beautiful if you catch them at the peak of their yellow phase. They’re much shorter than the western larches I see here in the mountains of Idaho, but just as pleasing.

Now, here in Idaho, larches are always within easy reach for me to enjoy.