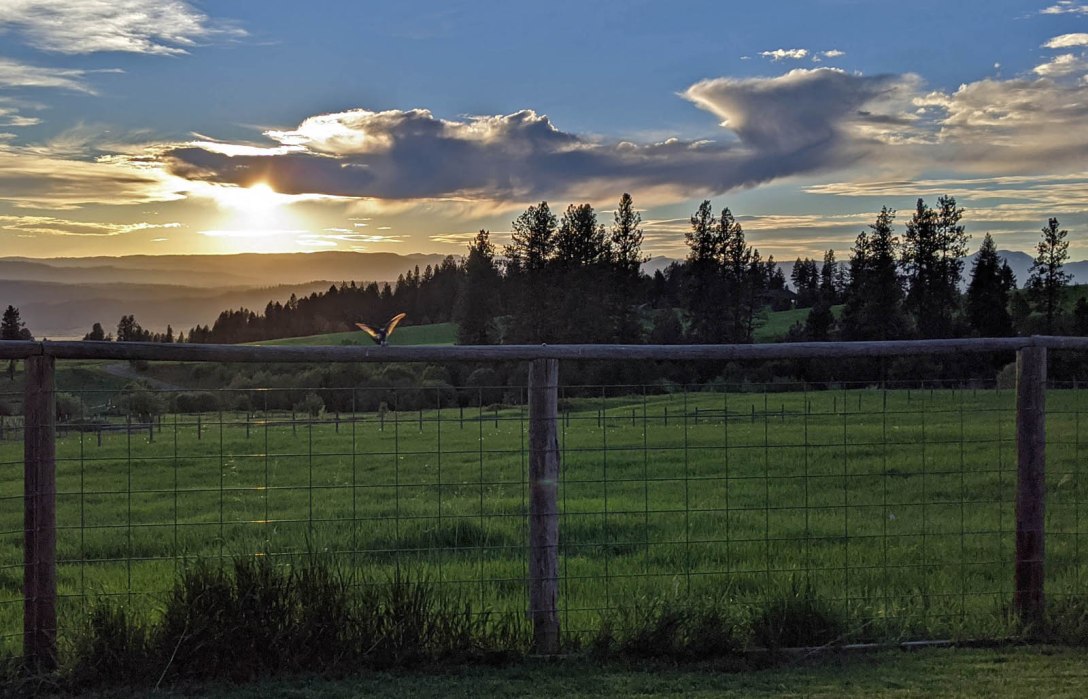 Some of the local birds have been busy lately, fascinating to watch. Some updates to previous posts.

Earlier this month while walking my dogs on our usual valley road, I heard sandhill cranes making more than their usual ruckus. (I wrote about two cranes that visited my lot last year here, and included some video clips where you can hear their distinctive calls.) It was clear they were upset about something.

While the boys went about the business of searching the ditches beside the road for voles, I looked across a pasture to try to locate the cranes. To my surprise, instead of cranes the movement I saw was a coyote. Suddenly the insistence of the crane’s calls made sense: they had a predator to contend with.

When writing about sandhill cranes last September I included some general information about them. I learned that when approached by a land predator, the cranes hiss, spread their wings and poke the air menacingly with their bills. If the predator’s not scared off by those tactics and comes too close, the cranes will stab – their bills can pierce the skull of a small carnivore – and kick.

Among the land predators they must contend with: coyotes.

I imagine that in addition to the loud and persistent calls I heard, these cranes were also flapping their enormous wings and moving their heads and bills in threatening manners to keep the coyote at bay. They’re large birds, prehistoric looking, almost as big as a coyote. Their tactics worked, because the coyote retreated.

I never did see the cranes that morning, just the coyote. The next day, however, I was driving past that pasture and saw two cranes moving in the grass among the shrubs that dot that particular slope. I’m sure they’re the same cranes I heard defending themselves or perhaps a new nest against the invading coyote the day before.

Amazing that they can intimidate a coyote. I hope my dogs never encounter a sandhill crane!

Recently I was enjoying the evening by reading on the deck as the sun slowly moved toward the horizon. Earlier I had mowed the lawn, so I was treating myself to some relaxation, a glass of cheap red wine enhancing the ambiance. I’d given the boys marrow bones to gnaw on, so they, too, were happy and mellow.

Apparently the setting sun put the resident tree swallows in an amorous mood. Taking no heed of me or the boys just feet away, a pair commenced their mating ritual on the fence rail, the sunset a glorious backdrop to their romance.

After all that drama, the male flew off, leaving the female alone on the fence rail, thinking whatever keeping-the-species-going thoughts she had before retreating to the nest box for the night.

If you learn how to be still and calm, to look and quietly observe, there’s never a dull moment in the natural world, including in your yard. Plants and animals are always moving, changing, evolving, creating another generation. Always something to see.