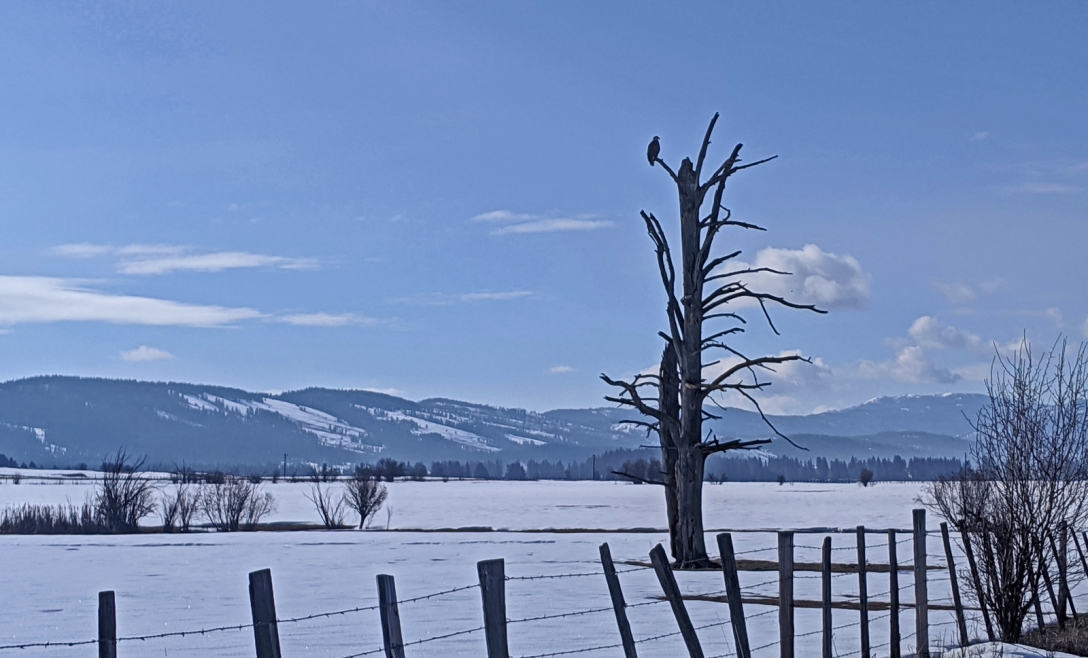 One of the few positives to come from these troubling times is that everything is quieter.

Things were already pretty quiet here in the Salmon River Mountains of rural Idaho, compared to the suburbs and cities I’ve lived in. Now, though, with little traffic on the two-lane highway that runs north/south just three miles west of me, the nearby snowmobile parking lot closed, and people mostly staying home, it’s even quieter. I’m able to hear more of nature’s sounds, whether from my deck or while walking the dogs on a nearby road. I could definitely get used to this.

For those unable to find such peace and quiet nearby as they hunker down and shelter at home, I thought I’d share some of nature’s beautiful sounds recorded over the past few days.

First, a pair of migrating Canada geese honking at me and my dogs as we walked by the field they were resting in, red-winged blackbirds singing in the foreground, on March 29, 2020.

The day before, off in the distance, we heard a coyote calling. You’ll hear her twice, faintly.

Also during that walk on March 28, 2020, I heard migrating sandhill cranes about a mile away in a pasture, too far for me to see them.

March 28th was a beautiful, sunny day. When my dogs and I arrived at our usual parking spot for our walk, I noticed a large raptor perched on an old, dead tree in the pasture on the other side of the road. The bird watched us but showed no alarm or inclination to fly away. I took some photos as it eyed me warily, then the boys and I walked north half a mile before turning back. When we reached the tree, the raptor was still there, watching. More photos. The boys and I walked south a half mile and returned, eyed with curiosity all the while by the raptor.

I think it’s a juvenile eagle. Sometimes the sun would reflect off its head, making the feathers appear white, but other times that wasn’t as distinctive as I would expect in an adult bald eagle. But it had a fair amount of white feathers on its chest, so rather than a golden eagle (much darker feathers), I’m guessing it’s a juvenile bald eagle working its way toward full white head and tail plumage.

Sadly, it kept quiet the entire time, so I don’t have a recording of an eagle’s piercing call.

Nor (thankfully) do I have a recording of the sound of voles being caught by dogs. This is the time when the dogs are most successful at catching voles, the latter exposed as the boys catch their scent, dig, and the voles run from under retreating snow pack across ground that has yet to provide them cover in the form of grass. Maybe the juvenile eagle watching us was simply waiting for an easy meal.

On March 30th, the boys and I ventured up into the forest for a hike/run on our usual route. This was significant only because it was one week post-surgery for Conall and his first long outing. He did great. Even though it was sleeting on us most of the time, we didn’t care. We were enjoying the peace and quiet of nature, with only bird song and our own breathing and footsteps breaking the silence of the forest.

Today, though, things got really interesting around here. Just before 6:00 pm, a 6.5 magnitude earthquake hit near Challis, a remote town roughly 150-200 miles to the east. I was in my kitchen and heard an odd rattling sound. I briefly wondered if it was my plumbing (although I wasn’t running any faucets), or dishes in a cupboard, which didn’t make any sense, when I started to feel the floor shake under my feet and realized it was an earthquake.

I stepped to the sliding glass door, opened it and looked out into the yard where boys were working the marrow bones I’d given them five minutes earlier. They didn’t seem perturbed that the ground was shaking, although they did pause briefly in their gnawing to look at me with curiosity. After a few seconds of shaking, I felt my house sway, like waves were undulating beneath it. That lasted just a few seconds as well, then all was calm and steady once again. The boys returned their focus to their bones.

I experienced two earthquakes while living in Seattle. One was the 2001 6.8 Nisqually earthquake. The other was a few years earlier, and I don’t remember the magnitude. Both experiences were very similar to tonight’s: I was at home, I heard things rattling, felt shaking, then swaying, then quiet. I actually enjoyed the sensation, something exceedingly rare and odd. Of course, had I been in a high rise building I probably wouldn’t have been so sanguine.

What I noticed during and after the quake was the quiet. It’s as if all wildlife takes a collective breath and holds it, waiting to make sure the planet returns to normal after a brief shaking. No birds singing, no dogs barking…nothing. Eerie, yet somehow part of the excitement and marvel.

Ah, but Mother Nature wasn’t through with us. First, about 30 minutes after the earthquake there was another quake in the same geographic vicinity, 4.6 magnitude, but I didn’t feel that one. (I now know that there’s a major fault in that area, and once it was discovered in 2010, a major quake of 7.3 or more in the coming decades was predicted.) At about the same time as the second quake, a snow squall moved in, hovering over the valley, winds gusting wildly, blowing the snow sideways while the sun was peeking through from the west. Crazy weather.

Within minutes, the squall moved through and blue skies reappeared.

Nature is awesome and deserves our respect.

Be safe, be healthy, shelter at home.