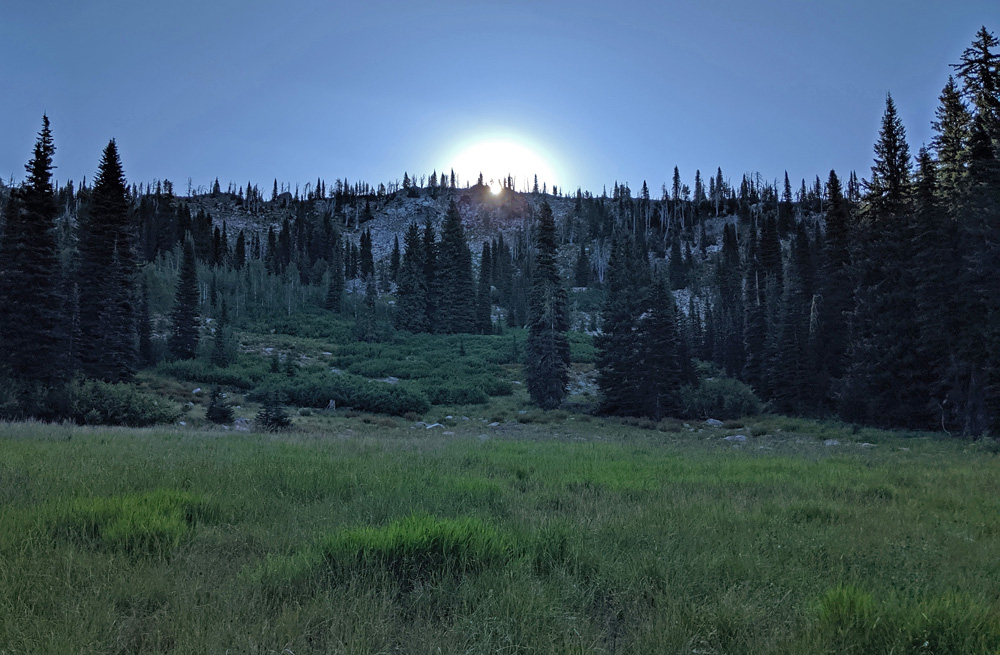 The plan, starting out, was to run what I call the grand loop, going up one side of the mountain to the summit, dropping off the back side to cruise a sweet three mile stretch of brand-new trail to the other side, then meandering one of two ways back down to the start. Eleven-ish miles total, with Conall for company. I knew from experience that he could find sufficient free-flowing water on the route. We started early because it was going to warm up quickly.

The first four miles are mostly up, going from 6,000’ to 7,500’ in elevation. I jog or power hike, depending on steepness. There’s a stretch of trail about 1.5 miles up where Conall starts lagging behind me; he’s usually leading the way. This is odd, so I keep looking back, urging him to catch up. He doesn’t seem injured or sick. I’m unsure what’s going on. I wonder if he has sensed a coyote or cougar in the trees alongside the trail and is protecting me from behind? Soon enough he resumes the lead and we both relax, moving through the last remaining place on the mountain that has some wildflowers.

I’ve left Finn home because at nearly 12 years of age, this run I’ve planned is too long for him. He would have done it willingly, and loved it, but the last miles would have been hard on his joints. I don’t like seeing him slow to rise and walking carefully at home after such a run. I want him to be able to keep running with me and Conall, at shorter distances, for another couple of years at least.

Both dogs have run this mountain with me too many times to count. There are places – boulders, downed trees – where they once saw a chipmunk, ground squirrel or pika hide after a quick chase. Each time they pass that spot thereafter they’re hopeful to find one again. It’s like a drug they can’t resist. On this morning, Conall is investigating all those usual places, even without Finn’s encouragement.

So when, about three miles into our run, Conall goes off trail into a boulder field after imaginary pikas, I keep running, knowing he’ll easily catch up. Eventually I call him. I watch as he leaps across boulders and over downed trees back to the trail. I turn and keep running, expecting him to catch me in seconds. Instead I hear a small squeal – it sounds like a chipmunk to me. I don’t hear the sound of Conall’s feet on the ground or his heavy breathing behind me. I stop to look for him. He’s standing several yards back, his left leg bent, holding one front paw above the ground.

Shit. Shit shit shit. This is my worst nightmare, one of the dogs getting injured when we’re miles from the trail head.

I return to where Conall’s standing, cooing things like, “Are you okay, Conall? Poor Conall, are you hurt?” as I approach. He’s standing still, holding his leg up, bent at the wrist, panting. When I try to touch his lower leg to see if I can tell where he’s injured, he growls at me. Mostly that’s his aversion to having me touch his feet, ever, but I’m not going to press him.

I encourage him to take a few steps so I can see if he’ll put weight on that leg. He does, but barely; his limp is significant.

This is where my decades of running, with many running-related injuries along the way, comes in handy. I know how easy it is to tweak or even sprain an ankle – or in Conall’s case, a wrist – while landing awkwardly on the trail. I also know from experience that if it is a tweak or sprain, the worst thing to do is stay still. By moving, even if limping painfully, blood flow is maintained and swelling reduced; you can at least get back to the car and address the injury properly at home. I decide we’ll take as long as necessary to return to the car. I know the shortest route back, about 2.5 miles down a different trail, and we’ll go as slowly as Conall needs. It’s a lovely morning on the mountain, after all.

As we start moving slowly down the trail, I have a flashback to over a decade ago, running a different forest trail with my two female Malamutes, Maia and Meadow. There was a stream several yards below the trail, and I urged both dogs to go down to drink, staying on the trail while they did. Maia came back first, then Meadow. As Meadow jumped over a downed tree, she landed badly and immediately yelped. She stood still in that spot, holding up a front leg, just as Conall had done, unwilling willing to put weight on it, to walk. We were five miles from the car, at our turnaround point, all alone out there, so this was potentially a really bad situation. After coaxing Meadow back to the trail, I pulled the leash I always carry from my pack and fashioned a sling that I put under her chest so that I could lift and reduce the load on her leg as she walked. We moved ever so slowly at first, Meadow and I sharing the single-track trail with Maia leading the way, Meadow barely weighting her injured leg. Eventually, after a slow mile or so, Meadow began putting more weight on her leg and walked a bit faster. After a couple miles I removed the makeshift sling and let her walk on her own, a bit faster but still only a walking pace. When we reached a downhill stretch about a mile from the car, she started trotting again, her limp barely noticeable. She was fine, no lingering injury.

I convince myself that Conall’s injury will resolve in the same way.

And, thankfully, it does. Fairly quickly, he’s putting more weight on the leg. By the time we return to the car, he’s moving normally. I watch him closely at home the rest of the day, including a short walk in the forest that evening with Finn, and don’t detect a lingering limp.

Our slow pace back to the car gave me plenty of time to reflect, not only on that long-ago incident with Meadow, but on advice my father always gave me. His advice resonated more deeply that day because it was the tenth anniversary of his passing; he was already in my head and heart. I had been thinking about him, about how much I miss him and his unconditional love. They say only dogs provide us with unconditional love, but I would argue that I was lucky enough to have a father who also gave that to me.

Along with the many gifts, including his love of animals – especially dogs – that my father shared with me, he taught me how to remain calm in a crisis, to assess my options and find the safest and most realistic way out of whatever situation I found myself in. He was a test pilot, after all; if anyone knows how to assess risks and deal with the unexpected, it’s test pilots. I felt like I was channeling all he’d taught me over the years from the moment I saw Conall holding up his injured leg: don’t panic; gather facts; list your options; choose the one with the best chance of success; focus, and go for it.

My day didn’t start as planned, but that’s how days often unfold. Embracing what comes your way and making the best of a situation, that’s what life is about. Many question, even criticize me, for venturing out into the forest on my own with just my dogs for company, taking what they consider unacceptable risks. But here’s the thing: everyday life is full of risks we willingly assume. Driving, hell, even leaving the house, is inherently risky. Living life fully is a matter of assessing the pros and cons of any action, determining the risk-to-benefit ratio, and deciding a course of action. Thanks, Dad, for giving me the courage to live life boldly, and the tools to stay calm and confront any challenge, taking calculated risks in order to grow and embrace all that life as to offer. These are life skills I’ve employed too many times to count, and for which I owe you an enormous debt of gratitude. I miss you.

Featured photo: sun rising over a ridge surround a meadow at 7,000′.

2 thoughts on “Life Skills: Dealing with the Unexpected”