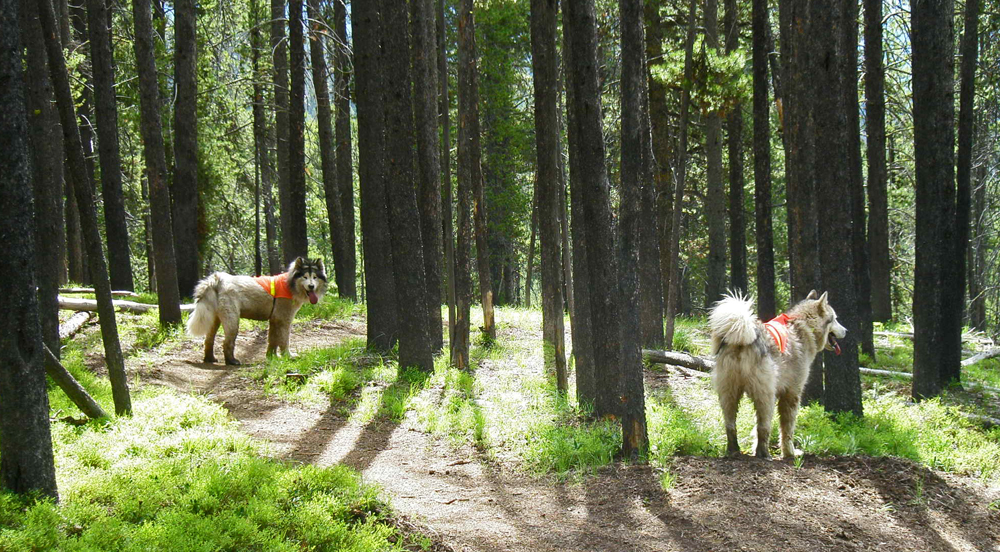 This morning, we saw one.

Running a trail in a remote part of central Idaho’s Payette National Forest in August 2006, my two Malamutes and I were allowed to commune with nature in a way most can only dream of.

First, the wolf and Maia exchanged direct looks. Then Meadow turned to see. Following their gazes, I too looked into the eyes of a truly wild wolf. I will carry the memory forever.

The girls and I were running on a wide dirt trail through a quiet, rolling section of forest. The trees here are tall, growing close together but without low branches or thick trunks, so one can see quite a distance through them. The ground is covered with short huckleberry shrubs, grasses and wildflowers such as lupine and phlox. A quiet burbling stream is never too far away.

The girls and I were three miles from the trailhead, on the “back” part of an out-and-back route we’d done once before. Early on a weekday morning, the air was cool and no one else is around, which we prefer. We stopped and went a few feet off trail to drink from a stream. Back on the trail, almost immediately after we started running again, Maia started at a noise. Throughout the run, her mood had been happy as she took her usual lead position, but her tail had dropped a few minutes earlier, a sign that something was making her nervous, something out there in the trees. I assured her we were fine, that the presence was likely another elk like the one we’d seen on the way out, the one that made so such a racket crashing through the undergrowth to avoid us. Within a minute of my soothing words, Maia halted, dropped her tail, turned, and saw the wolf. She stood stock still.

Maia’s quiet anxiety caught Meadow’s attention, and mine. I’d learned to watch Maia’s body language as she led us down forest trails, alerting me to wildlife or people ahead. Meadow also dropped her tail – unusual for her – and stood shoulder-to-shoulder with Maia, looking in the same direction. They both pointed me to look where I would never otherwise have seen the wolf, blending as he did with his shadowy environment. He stood a mere 100 feet away, if that, watching us, head and ears perked, very still, eyes intense and interested.

Standing with the low undergrowth around his lower legs, he was gorgeous, the sun slanting through the tree trunks dappling his coat and illuminating his amber eyes. His coloring was much like Maia’s, grey with black guard hairs, a hint of brown mixed in, no white on his muzzle. Tall, with long legs.

I didn’t sense danger. Nor aggression. Just curiosity. His body language put me at ease. I had no desire to run away. It was peaceful, almost surreal. A gift.

I gently told the girls to stay, almost a whisper, breaking eye contact with the wolf to make sure Meadow was listening (she was), though they didn’t seem inclined to move. When I looked up again, the wolf was just turning. He calmly trotted away from us, so light on his feet that he was almost dancing. To make sure he kept going away from us, I clapped my hands together once, loudly. After quickly glancing over his shoulder at me, he picked up his pace and faded into the background. I felt bad, startling him, but was glad he continued moving away.

I didn’t see any other wolves, although it was known that a pack called this part of the forest home in those early days of wolf reintroduction in Idaho. I felt certain they were nearby, though, perhaps watching from the deeper shadows as their more adventurous pack member got a closer look at the odd sight of a human running with two wolf-like dogs. Except for the occasional faint crack of a twig underfoot as the wolf gracefully slid away, the forest was quiet.

The entire encounter lasted mere seconds. Reliving it while driving home, it seemed as though I’d dreamed it.

I marveled that we all reacted the same way: cautious, curious, awed and quietly ready to retreat.

I’d give anything to know what Maia—and the wolf—were thinking when they exchanged that initial look. What did their eyes say to one another?

On the drive home that morning, I stopped at the post office in my tiny community to pick up my mail. Still jazzed by the wolf encounter, I wanted to share the wonder of it with someone.

“Guess what my dogs and I saw while running in the forest this morning?” I asked the clerk. When she took the bait and asked, “What?” I broke out into a big smile and said, “A wolf!” The clerk sucked in a breath, her face assuming a shocked look. She instantly asked, “Did you have a gun?” It took me a second to understand the question, to grasp that she was one of so many locals who assumed the wolves moving into the forests were killers who were just looking for an opportunity to harm people. I told her no, I don’t carry a gun. She insisted I should, that it’s dangerous out there. When I got a similar reaction, the second time I shared my encounter with a local that day, I vowed to stop telling.

Wolves had been reintroduced into central Idaho in 1995, along with the better-known wolves in Yellowstone National Park. When I moved here in 2005 they were still protected under the Endangered Species Act, but locals were up in arms about them and very much feared them. The rumors and myths about them, reported as facts, were…fantastic.

That night, needing to share the magic of the experience with someone who didn’t fear or hate wolves, I wrote a long email to a friend back in Seattle, describing in detail how things played out. He understood; he was excited that the girls and I got to have such an encounter. Then I thought I’d share that email version of the story with Claudia Kawczynska, the editor of Bark magazine. I had started writing for Bark in 2004. I figured Claudia would understand how special the encounter was. She did. In fact, she immediately replied by asking if she could turn the email into an End Piece essay for the next issue of Bark. I was thrilled. The piece was published in the September 2006 issue, last page, a slightly different and longer version than the one above, but starting with the same first three lines.

I remember eventually talking to my father on the phone about the wolf encounter and the reactions I got when trying to share it with locals. I get my love of animals and being in nature from my father. When I asked Dad, mostly rhetorically, why people here believed such crazy things about wolves – I had been told by a contractor working on my house the year before that wolves would start snatching children off of school playgrounds, something he fervently believed – my father offered a classic response: “I guess they believe in fairy tales.”

In 2009 it became legal to hunt and trap wolves in Idaho. Even before then, I made sure my Malamutes wore bright yellow Do Not Hunt Me vests every time we ventured into the forest. Too many people asked me if they were wolves.

In late 2008 the girls and I – and my rescued Aussie Finn, who joined us that summer – moved back to Seattle to ride out the recession. I found a job that allowed me to keep my Idaho house while living in Washington, knowing I’d return when I could. In the meantime, we spent vacations here, visiting our favorite trails as much as possible during the summer months while the girls were still able. They were aging.

In the summer of 2013, I spent the entire summer in Idaho with all three dogs, writing my first book. That summer I had to say goodbye first to Maia, then Meadow. Maia died of old age. She was 14, and had beat lymphoma into remissions a few months earlier. I was expecting her death and as prepared for it as one can be. Meadow was only 12, though. Sadly, she had bone cancer, discovered three weeks after Maia’s passing. I said goodbye to Meadow just six weeks after Maia. It hardly seemed real. In both cases, I held the girls’ heads in my hands here at home as they were administered the drug that stopped their hearts. The grief was awful, viscerally painful. I had each of them cremated, but I wasn’t sure what to do next, what to do with their cremains.

To help me deal with my grief, I kept running trails most mornings, now with Finn as my canine companion. The forest, nature, always heal me and give me perspective on life. While moving along a trail I’d run with the girls in years past, watching Finn as he ran ahead, memories of the girls would flow into my heart. Eventually my tears changed to smiles. That’s when I knew what I needed to do.

To honor the girls and the places we spent so much happy time together in the forest, I decided to build small rock cairns and leave some of their ashes in a few places where I had taken photos of them in better times. One of those places is where we saw the wolf. Finn went with me to build the cairn and offer the girls’ ashes to the forest in late July, 2013.

I try to visit all of the Idaho cairns I’ve built – five in all – at least once every summer. Finn, and now Conall, join me. Some cairns I visit almost weekly. I also left some of the girls’ ashes on two favorite trails in western Washington, but in those cases placed the ashes inside old cedar stumps near streams they enjoyed drinking from. And finally, some ashes were sprinkled on a high alpine lake in Washington’s Cascade Mountains, a place where both girls enjoyed wading to cool off on warm summer mornings midway through a long and challenging trail run, where Meadow discovered the joys of huckleberries, learning how to pick them herself. I still have a small amount of their ashes at home, awaiting the building of a cairn in my own wildflower garden.

Ironically, not only are wolves in the national forest controversial, but now it seems cairns are as well. I try to always come down on the side of live and let live in such debates, but I’m usually in the minority. My next post will tackle the issue of cairns on public lands.

Cover photo: Meadow and Maia on the same trail where we saw the wolf, the next summer (June 2007).

5 thoughts on “The Wolf Visit”