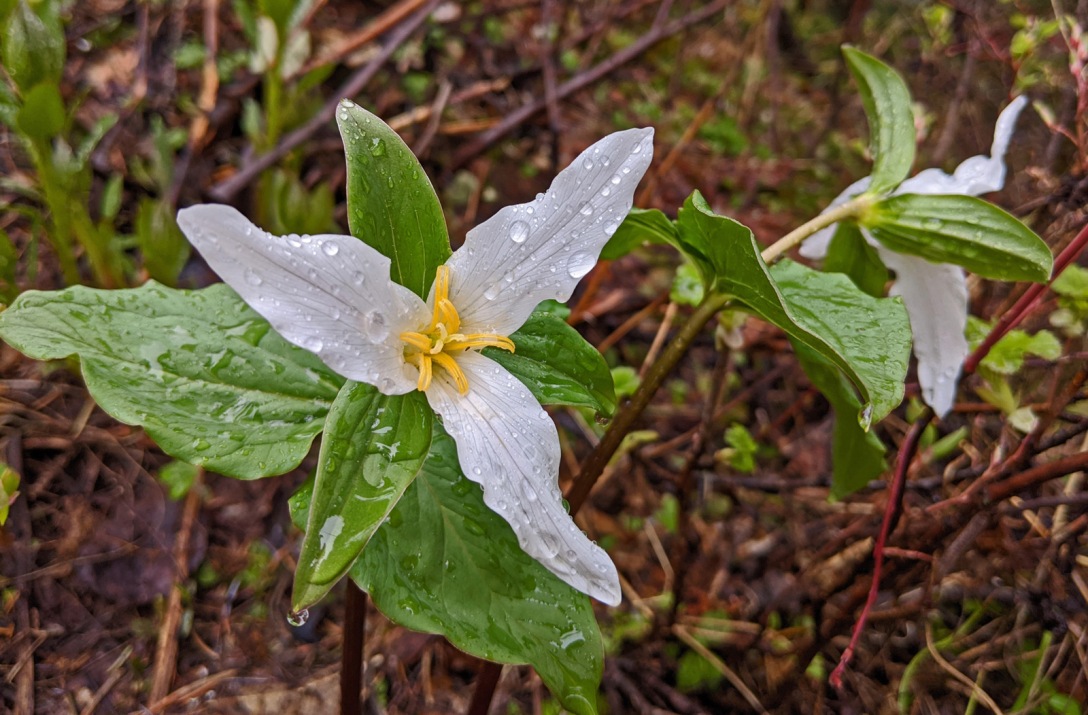 I first became acquainted with trillium wildflowers in the forests of western Washington. At the lower elevations of the Cascade foothills where I did so much trail running before moving to Idaho, they were the first wildflower of spring, adding bright splashes of white and green near the ground where they grew under the tall evergreen trees.

And long-lived: the oldest known was 72 years, but on average they live about 25 years.

So I was pleased upon moving to Idaho to find trillium playing the same role here in the mountains, ushering in spring, even if a couple of months later than what I was used to in more temperate and lower-elevation western Washington. Trillium are one of the first wildflowers to bloom here as well, often at the edge of a patch of snow clinging tenaciously to a shady spot, or under the canopy of tall trees.

All trillium species belong to the Liliaceae (lily) family and are rhizomatous herbs with unbranched stems. Morphologically, trillium plants produce no true leaves or stems above ground. The “stem” is just an extension of the horizontal rhizome and produces tiny, scale like leaves (cataphylls). The above-ground plant is technically a flowering scape, and the leaf-like structures are bracts subtending the flower. Despite their morphological origins, the bracts have external and internal structure like a leaf, function in photosynthesis, and most authors refer to them as leaves.

A common name for trillium, wake-robin, is a nod to the flower’s symbolizing the arrival of robins, and spring.

Trillium ovatum, the Pacific trillium, also known as the western wake-robin, western white trillium, or western trillium, is found in western North America, from southern British Columbia and the tip of southwestern Alberta to central California, east to Idaho and western Montana. It’s the trillium I’m familiar with.

T. ovatum is arguably the showiest of the western North American trilliums and it is certainly the most widespread and abundant. The type specimen for this species was gathered by Meriwether Lewis in 1806 along the Columbia River during the return trip of the Lewis and Clark Expedition.

The white flowers of the western variety eventually turn pink, a signal to pollinators that it’s past its prime so move along to a better option. How efficient! These trillium are pollinated by honey bees, bumblebees, and wasps.

The Red Trillium (Trillium erectum) which grows in the eastern U.S., has no nectar so it isn’t pollinated by bees. The petals of the flowers exude an odor that attracts carrion flies and beetles which pollinate the flower.

The trillium flower produces seeds that are spread about by ants and mice. After being kept warm through the summer, the seed eventually germinates and roots but doesn’t produce leaves. The seedling continues to develop in the dark, underground, for almost a year before sending a green leaf up to find light and the warm of the sun the next spring.

Picking leaves off a trillium plant can kill it even if the rhizome is left undisturbed. Some species of trillium are listed as threatened or endangered and collecting them may be illegal.

High white-tailed deer population density may decrease or eliminate trillium in an area due to their grazing on the leaves.

Several species of Trillium contain sapogenins, making them useful medicinally through the ages as astringents, coagulants, expectorants, and uterine stimulants. These traditional uses are evidenced by two of trillium’s common names, birthwort and Indian balm.

In folk medicine, trillium has had many uses.

Bethroot is astringent, tonic, and antiseptic; it has been employed successfully in hemoptysis, hematuria, menorrhagia, uterine hemorrhage, metrorrhagia, leucorrhoea, cough, asthma, and difficult breathing, and is said to have been much used by the Indian women to promote parturition. The astringent varieties of Trillium have been found useful in hemorrhages; the acrid species in chronic affections of the respiratory organs, phthisis, hectic fever, etc. All the varieties have been found efficient, either internally or externally, in chronic mucous discharges, bronchorrhoea, leucorrhoea, menorrhagia, etc. Boiled in milk, it has been administered with benefit in diarrhoea and dysentery…. Externally, the root, made into a poultice, is very useful in tumors, indolent or offensive ulcers, anthrax, buboes, stings of insects, and to restrain gangrene.

While the trillium blooms are gone near my house, they’re just getting started at higher elevations, doing their job of welcoming spring, robins, and me.

17 thoughts on “Thrilled by Trillium”